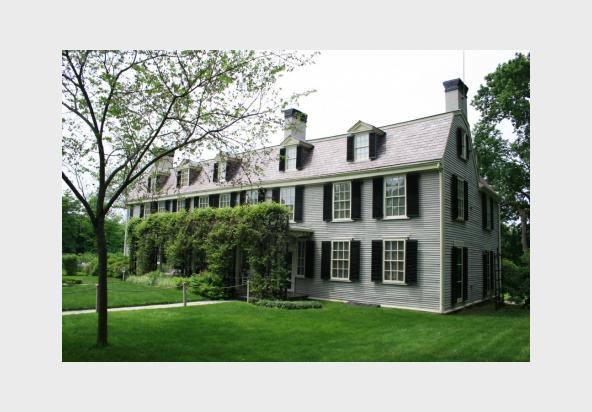 Built in 1731, the Old House at Peace field became the residence of the Adams family for four generations from 1788 to 1927. It was home to Presidents John Adams and John Quincy Adams; First Ladies Abigail and Louisa Catherine Adams; Civil War Minister to Great Britain Charles Francis Adams; and literary historians Henry and Brooks Adams. The vast collection of original artifacts inside the Old House greatly assists the parks interpretive staff to relate the Adams familys legacy of service to their nation.

John Quincy Adams had requested in his will that a fireproof structure be constructed separate from the house for his books and papers. In 1870, a medieval style Stone Library was designed. Considered Americas first Presidential Library, it contains more than 12,000 books including the Mendi Bible, given to John Quincy Adams by the Amistad slaves that he defended in front of the Supreme Court after his presidency. Following a tour, you may wish to stroll the Old House grounds which include the Carriage House (1873), a historic orchard and an 18th-century style formal garden, containing thousands of annual and perennial flowers.